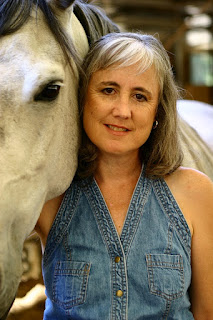 Today I’m excited to interview Karen Sandler, the author of Tankborn. After emailing with Karen and reading her blog and website, she still managed to surprise me with her answers. She leads such an exciting life!

Hi Karen! You write romance and YA sci-fi, but which is your favorite?

Science fiction is my all-time favorite genre. Although I’ve always read pretty widely and eclectically, SF is number one. It’s the first genre I tried to write too. I wrote plenty of SF short stories before I ever wrote my first romance. The second romance novel I wrote (the first one was too abysmal to count) was a science fiction romance.

You worked on the space shuttle program. That’s so exciting. Do you think that this contributed to your fascination with other worlds?

I think my fascination with other worlds led me to want to work on the space shuttle program, and in turn the job fed my fascination with other worlds. I should also mention that I applied to be an astronaut with the space shuttle program. I didn’t make it very far (never heard back from NASA), but I followed the launches and space walks, grieved terribly with the Challenger and Columbia disasters.

It amazes me that there are people out there who don’t like science fiction. It’s a little like not liking chocolate. I see the science fiction genre as a guide to our future—good and bad. In fact, maybe reading about the bad (such as dystopic stories like The Hunger Games and Tankborn) can help us make better decisions for our future.

I’ve heard you mention the idea that if we are not expected to do great things then we are more likely to excel. Do you find this is often true?

What I was trying to say is that sometimes high expectations can be paralyzing and demoralizing. I remember my first year in graduate school I felt overwhelmed by class work. Prior to that, school had been my area of success. But in grad school, I was trapped both by my own expectations of myself, and the role I played in my family—I was the smart one, the one who did well in school. My very identity was threatened by what I thought was imminent failure. I was having some pretty dire thoughts, experienced some very dark moments. I did push through and made a respectable showing, but it was a difficult time.

I don’t think the opposite is a good thing—having it ingrained in you that you’ll never amount to anything. But there’s a certain freedom in not having external expectations at all. To excel because you find joy in excelling, to succeed when you’re self-motivated. There’s a freedom in working hard because you want to, not because you’re expected to.

Do you have a favorite email from a reader?

This isn’t from an e-mail, but from a snail mail letter. Here’s the best part:

It put a huge smile on my face when I pulled that letter out of my P.O. Box and read it the first time. I’m sure I’ve read it more than five times since.

You wrote in your blog that you are a fast walker and do not like to meander. Does that translate into your writing career?

Well, being a fast walker doesn’t translate into my writing career, but maybe into my writing process. When I was writing the shorter romances I did for Harlequin, I used to write them pretty quickly (a 60K word book would take about 4 months). I’ve tried to keep up that same pace with the SF books, but they are far more complex plots. The details really take some thinking about. So while I do keep up a pretty decent pace (and I’m generally screaming fast when I get close to the end), I don’t write nearly as quickly as I used to. But I still walk fast.

My goal is always to get the book written, the manuscript finished, before I revise. In practice, I do end up doing some light editing as I go, usually going back to touch up a page or two from a previous writing session before going on with new material. Also, when I figure out something needs to be changed earlier in the book that’s going to foreshadow something later, I’m not very good at leaving that for the revision process. I feel much better going back and working in the foreshadowing or clues that occur to me, then once that’s in place, move on.

I do sometimes just make a few notes to myself about stuff that I’m going to have to handle in the re-write. But even in those cases, they’re often notes made at the end of the day and are the first thing I handle the next time I sit down to write.

But I do generally write the entire manuscript, then do a read-through during which I make the changes I see are necessary. I always know, though, that my editor will have changes of her own, which might be fairly extensive. It’s kind of cool finding the solutions to the problems my editor points out.

You have cats and horses and you dance too. Do these hobbies find their way into your books?

Heh. Cats aren’t a hobby. They’re a way of life. At least the cats think so. I have three—a young former feral named Zak, a rather chubby female Siamese/calico mix named Tenka, and a cranky old guy, Casper, who’s diabetic and requires insulin shots twice a day. They all live indoors only (Casper used to go out during the day until he got beaten up by a stray dog).

My mare is an Andalusian/Morgan cross and I mainly do dressage with her. Dressage is that really boring equestrian event that no one watches at the Olympics.

The dancing I do is international folk dance. It’s a fun mix of partner dancing and line dancing from countries all over the world—Israeli, Romanian, German, Indian, Japanese, Norwegian, American, British, Italian, etc. My husband and I belong to a group that meets weekly, then we’ll do the occasional performance or special event. Here’s a video that includes my husband and me dancing. I’m the one in the black turtleneck and striped skirt.

I have rarely been able to work either cats or horses into my books. Of the nearly 20 books that I’ve published, I think there were two books that included cats (the romances Chocolate Magic and His Miracle Baby) and two that included horses (romances The In-Between and Counting On a Cowboy). The animals were very minor influences on the plot.

I do have a dance scene of sorts in the upcoming Awakening, the second book in the Tankborn trilogy.

Where can we watch your short films?

Thank you Karen for interviewing with me! Please feel free to send Karen your questions and thoughts in the comment box below.

Review of Tankborn, a young adult novel by Karen Sandler
Violence and the Open Sky in War and Peace