At 14,505 feet, Mount Whitney watches, serene and deceptively inaccessible, over the Owens Valley. The tallest peak in the lower 48 states, it is a desirable destination for so many hikers and climbers that a permit quota system had to be enacted. Not only is the mountain big enough to feel unique and simple enough to be “peak-bagged” by the layman, but you can climb it in as little as a day. Compare that to Denali (two to three weeks) or Everest (nearly six weeks), and you can see the allure.

Hiking up the trail on Wednesday, June 6th, I knew we were most likely too early in the season to make it to the summit. Still, the day was lovely. The sun shone brightly on blue sky, grey rock, and white snowy patches, and after having hiked for four hours in the dark, we were enjoying the sharp sun-to-shade contrast and, even more, the tiny alpine flowers which, I was delighted to discover, had began to bloom.

As I bent to take a photo of one intricate violet bloom which was growing, like a miracle, on a shelf in the rock face, I noticed something which did not seem nature-made had been stashed right next to it. A bulky black plastic bag, tied into a knot and weighed down by a big rock, was almost perfectly hidden beside the flower. 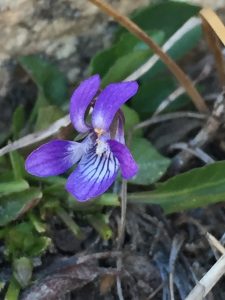 The little flower next to the secreted WAG bag

Once upon a time, when only a few people climbed Mount Whitney, there was little need for regulations and rules. Today, however, the land surrounding the trail is heavily impacted by human traffic, including the waste that said human traffic leaves. In 2004, the Forest Service removed two composting toilets and one pit toilet from the trail camps and the summit of Mount Whitney. The toilets required maintenance, which in turn required helicopters to fly in and out of the area — a big deal when the area is a federally protected Wilderness. A new solution had to be found.

On Monday, June 4th, Karen, Ross, and I went to claim our permit at the visitor center in Lone Pine. We each received from the smiling ranger a rectangular tag with the date of our climb and a plastic-wrapped WAG bag. The ranger then asked if we had ever used a WAG bag.

“No,” we replied, shifting in place.

The ranger turned around and, in one swift motion, collected a demonstration kit. “You spread this out,” he said, “and poop here, and pee a little which activates the sawdust, and then you put it here, and tie it up like this, and,” he added triumphantly, “they are reusable!”

WAG stands for Waste, Alleviation, and Gelling, an unappetizing name. Once open, the bag is bulky and not exactly scent-proof, making it uninviting to hang from your pack or, worse, place inside. Perhaps this is why we saw several of these bags deserted on the trail. Whether behind or under rocks or unashamedly out in the open, hikers on the Mount Whitney Trail make no fuss about leaving their poop — nicely bagged — behind.

I see similar bags frequently on the trails by my house, sometimes even on the street. Owners collect poop, this time their dog’s, and leave the bag behind, adding — it seems to me — littering to negligence.

Sadly, pooping all over the place is not the only way we pollute our world. A headline from the New York Times reads, “The Chemical Industry Scores a Big Win at the E.P.A.” Turns out, as of a few days ago, when evaluating new chemicals, the industry need worry only about chemicals in direct contact with humans, for example, in the workplace. The impact of potentially-toxic chemicals on the environment, our water, air, and land, need not necessarily be examined. 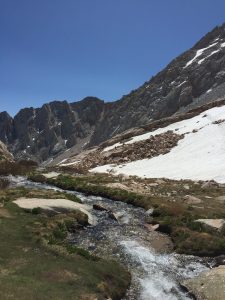 Water is everywhere on the Mount Whitney Trail.

Perhaps I am in a minority, but to me these are all examples of a nearsightedness almost unbearable to behold. Human poop as well as dog poop contaminates water and soil, sending, moreover, (in the case of Whitney) an unpleasant odor into the pure, rarified air of higher elevations. The plastic bags, whether compostable, recyclable, or not, are not meant to be left out on the trail and end up contaminating the environment, a hazard to water, air, soil, and wildlife. Need I mention they are unsightly as well? Seven billion of us poop and pee every day and flush the toilet to make it disappear. Except, of course, that it does not. Neither do the compound chemicals which we release into the world.

Perhaps if we cared enough about the impact of all this poop, if we educated ourselves about how this poop affects our environment — our water, our air, our soil — we would not be so callous about allowing toxic chemicals to enter into the air, soil and water either. Perhaps if we took the trouble and accepted the inconvenience of carrying our poop out the eleven steep and difficult miles of the Mount Whitney Trail, we’d be willing to do a lot more to make sure our children do not end up drinking lead in their water, eating toxins in their food, or breathing yet other poisons in their air.

It all starts at home, in the privacy of our thoughts. We have all made these mistakes. We have all — I am ready to bet — pooped where we shouldn’t, peed too close to a stream, thrown away plastic we could have recycled. Perhaps it is time not to beat our chests with guilt but to stand up and say: I can do better.

I can reduce, reuse, and recycle. 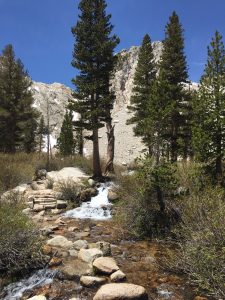 I can be more conscious with my shopping choices.

I can pick up after my dog and dispose of the poop responsibly.

And I can do the same for my own, when out hiking and backpacking.

While looking for the acronym WAG online, I found out its name is being changed (and trademarked) to “Go Anywhere Toilet Kit.” I wonder if, perhaps, the organization producing these kits should not reconsider the name. Toilet Kit sounds too much to me like something stationary. Perhaps “Carry with you human doodoo bag” would be better. Or, “Dispose responsibly take-along pooper bag?”

What do you think? Can you come up with a better name?