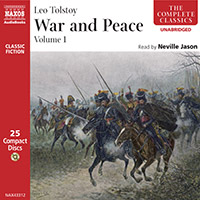 For the past couple of months I’ve been listening to War and Peace on audio book. As a  teenager, I read many of the Russian authors, including Tolstoy, but the title War and Peace daunted me. I had never been particularly fond of war. Tackling the book as an audio book seemed easier — I wouldn’t need to do anything but listen during my hours of driving every day. The audio book is over 60 hours long, and I have listened already to 50.

Listening to the book, I understand why it is praised as one of the greatest novels ever written. Natasha’s search for love, falling in love first with Boris, then with Prince Andrei, and then with Anatole, is the best kind of soap opera. Natasha, joyful and impetuous, is impossible not to love. I found myself identifying with the confused and innocent Pierre and his search for meaning, with the lonely Princess Maria who yearns to find an outlet for her love and caring, with the friendly, good-natured Count Rostov who seems unable to stop giving his money away and lets everyone cheat him.

It is now 1812 in the novel, and the French have occupied Moscow. The last battle of Borodino has taken a heavy toll. Prince Andrei has been wounded. Anatole lost his leg, perhaps has died. Pierre was dazed by what he has seen, describing a fallen colonel as though the colonel were inspecting something on the ground. In Moscow, the mayor hands over a political prisoner, Vereschagin, to the crowd to be lynched. The Rostovs leave most of their belongings behind in order to provide transport for the countless wounded soldiers that would otherwise be abandoned in the city. It is a gruesome time, and I am not enjoying it.

This morning, while trying to find the correct spellings of characters’ names, I ran into a surprising fact about Tolstoy. Turns out Tolstoy is known for his non-violent teachings. He was a vegetarian and has corresponded with Ghandi and was one of the biggest influences on Gahndi’s decision to pursue nonviolent resistance of the British. Amazing, is it not? “To get rid of an enemy, one must love him,” Tolstoy had said. 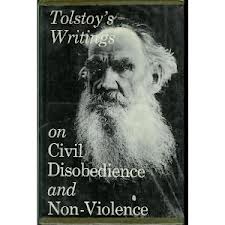 One of my favorite parts in War and Peace was Nikolai Rostov’s first meeting with battle. Instead of concentrating on the smoke, the fire, the shots, Nikolai suddenly realizes that he is in nature, that the sun is shining and the sky is blue. He is overwhelmed by love of life and the world. Tolstoy said: “One of the first conditions of happiness is that the link between Man and Nature shall not be broken.” I suppose at that moment, in the midst of chaos and violence, Nikolai was able to let go of fears and anger and violence, and be happy.

Interview with Author Karen Sandler
Happily Ever After, The End