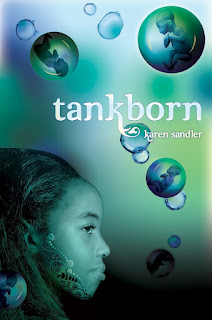 Kayla is a GEN, a genetically engineered non-human. She was born in a tank, made from a DNA mix of animals and humans that was chosen to ensure she can fulfill a specific role in society. On the planet Loka, GENs are servants without the choice of where they serve, forced to wear gloves if they touch a human and forbidden to look into the eyes of a Trueborn.

We meet Kayla on the eve of her 15th birthday when she will receive her first assignment. But something about Kayla’s first job is odd, and the circumstances surrounding it are not quite what Kayla had been taught to expect. Kayla’s employer is a very old man with many secrets, and his secrets have the power to overthrow Kayla’s well-ordered view of her world.

Tankborn is a thrilling adventure and a romantic love story, but it also echoes (without being annoying) with political, religious and social undertones. It shows the difficulties of being at the top of the social ladder as well as the injustices suffered by those at the bottom, and how religion can be used to control an entire class of people.

The novel has an intricate plot that brings together many details and threads into a tightly-woven world. The planet Loka is complete with wildlife, geography, and climate, and the human impact — whether through technology, social norms, or the exploitation of natural resources — on it is already jarring. The higher class uses holograms to beautify homes and gardens. The low class no longer needs to fill low-rung positions like cleaning, mining, caregiving, because GENs are genetically engineered to fulfill these roles. The people of Tankborn are trapped in their positions in society, with only a few who are willing to fight to change the rules.

Karen Sandler’s Tankborn transported me so far out of my own life that, for the few hours which it took me to devour it, I lived right there on the planet Loka with Kayla and watched her adventures unfold as through a camera lens. I am so glad I got to read it — I don’t often pick up sci-fi novels — and to know Karen who has been so kind as to answer a few questions about this wonderful novel.

Hi Karen! You’ve said in one of your videos that you would prefer to be Lowborn than Trueborn so as not to have to worry about losing your status. Do you think teens would relate to the idea that it’s not that easy to be popular?

I don’t know if I consciously thought of it like that, but yes, being a high-status trueborn is very like being one of the very popular kids in high school. Life can often look easier for other people if we’re watching them from the outside, but we all go through tough emotions in high school (and beyond). As bad as the humiliation was that I sometimes experienced as one of the very unpopular kids, it might have been much worse for a popular girl. She would have so much farther to fall in the eyes of others in her clique.

The world of Tankborn is extremely detailed. Can you tell us what it was like to imagine everything about Loka from scratch?

The world building happened in layers. I got the bare bones of the plot down, then handed it off to my son (a voracious SF/F reader) for a beta read. His feedback led to another layer of world building, then the same with my agents and eventually my editor, Stacy Whitman at Tu Books. Stacy’s feedback led me to fleshing out the most complex elements of the planet Loka and Tankborn’s society. In fact, on my hard drive, there are files full of details that never made it into the book, although they inform the structure of Loka’s society. Stacy would ask questions, which led me to creating a particular aspect of Loka’s backstory, which I would send to her to answer her questions, which would lead to more questions and further answers. There’s some pretty interesting stuff about Loka on my hard drive. Some of it (artists concepts of the flora and fauna, for instance) can be found at the Tankborn website and some will be up on my website soon.

What are you working on now?

I recently turned in to my editor a major re-write of Awakening, the second book of the Tankborn trilogy. I’m just starting the synopsis of Revolution, which will be the third and final book of the trilogy.

I will be looking forward to more of Kayla’s story when it is published!

Please join me tomorrow in a full interview with Karen about her cats, the space program, and why sci-fi is such a great genre to read and write.

To learn more about Karen Sandler and Tankborn you can go to:
Tankborn website
First four chapters of Tankborn
Karen Sandler’s website
Tankborn on Goodreads