The place where my family and I live feels like a safe place. Sure, there’s earthquakes, landslides, car accidents and other hazards that pose some risk to our safety, but on a day-to-day basis we rarely, if ever, have to worry about them. The likelihood of a dictator taking over the United States and deciding to annihilate all Jewish Caucasian mothers, or any other racial denomination I belong to, is quite slim. I am, most likely and most often, safe.

I am unlikely to wake up one morning and be told to pack up only as much as I can carry and move to Central California, where from now on I will have to work in the rice fields day and night. Nor am I likely to find myself sitting in long meetings in which the shape of my nose or the color of my skin will be judged, and after which, those who have failed the test will be taken under the mango tree and beat to death with an axe. 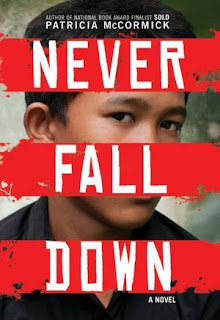 Patricia McCormick’s Never Fall Down is a raw retelling of Arn Chorn-Pond’s experiences in Cambodia under the rule of the Khmer Rouge. Arn was just a child when the Khmer Rouge took over his village and told  the inhabitants that they must move to the countryside for “just three days.” Arn found himself working in the rice paddies, separated from his family, continually in danger for his life. The camp where he worked also served as an execution ground, and Arn realized his survival depended on the whims of the Khmer Rouge guards. He made himself a rule: Never fall down.

“Bend like the grass,” Arn’s aunt told him, and he tried to follow her advice. Despite never having played an instrument before, Arn volunteered to play the flute and became the leader of a band that was made to play to cover the noises of the executions. Later, as the Vietnamese began to advance, Arn had a weapon thrust in his arms and he became a boy soldier. With compassion and humanity, McCormick draws Arn’s portrait, a boy who does heart-rending things in order to survive. She shows with haunting clarity the boys bent in the rice fields, the ever-growing mound under the mango tree where a sickeningly sweet smell persists, the blank face of the music teacher, the line to receive the thin rice soup, and the boys crawling to reach the latrines.

My family and I live in a very safe place. Oak trees and tranquility rule outside my window. I am so grateful for having been born where I was. Many are not so lucky. So many children, adults, the old, are in need of homes, live without running water, struggle day to day to survive. I’d like to send my thoughts today to those in need, whether here in the United States, Cambodia, or elsewhere in our crazy, sometimes cruel world. I wish everyone could have a day of rest today, a day of sunshine and love.

Arn Chorn-Pond survived. He was adopted by an American U.N. worker, became a speaker about his experiences, and created several organizations that help children of war and that help return to Cambodia the traditional music and art which the Khmer Rouge had tried to eliminate.

Flags of Our Fathers by James Bradley
Scooby Doo, Life, and the Joys of Parenting

One Response to Never Fall Down by Patricia McCormick