In the musical Wicked, the Wizard of Oz taunts Elphaba: “Where I come from, we believe all sorts of things that aren’t true. We call it history. A man’s called a traitor or liberator. A rich man’s a thief or philanthropist. Is one a crusader or ruthless invader? It’s all in which label is able to persist.” The wizard’s words are cynical, but remind me of an important truth: history is what we remember after the fact. There is no such thing as an objective truth.

Flags of Our Fathers by James Bradley is the story of the famous photograph of the soldiers raising the flag on Iwo Jima. One of these soldiers is the author’s father, John Bradley. The author showcases the many coincidences, myths and inaccuracies which turned the photograph into perhaps the most well-known image of World War II and a publicly acknowledged symbol of heroism. The entire lifting of the flag was a four-second event. A 1/400the of a second exposure by a photographer who barely had time to see the image he was capturing on film before he pressed the button, and the result became a symbol of valor under fire. 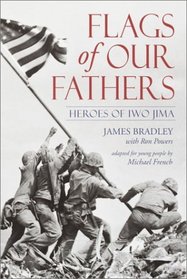 Was the raising of the flag an act of heroism? For me, it surely was. Its inspiring symbolism, in fact, is the reason I picked up the book in the first place. James Bradley, however, tries to portray the act of raising the flag as an ordinary, unimportant moment which the flag raisers barely recalled after it passed. “I want you to always remember something,” John Bradley told his son when the latter asked about the photograph, “The heroes of Iwo Jima are the guys who didn’t come back.”

The moment of raising the flag takes up twelve pages in this two-hundred page book. Surrounding the famous moment are the six young flag raisers, their life and death, hopes and dreams, and the chain of events which made them into celebrity-heroes. The book is, most importantly, the story of the bloodiest battle of World War II, a battle which claimed over 26,000 casualties on the American side: 6,821 dead and 19,217 wounded, as well as 21,844 dead Japanese (out of 22,000 who were stationed on the island).

Inspiring courage was the only thing on my mind when I suggested the book to my son for his reading project. What both of us encountered was a completely different experience. “This is a book of death,” my son said after reading the chapter titled D-Day. This a book about the truth behind the symbol, I thought to myself. It’s a book about how terrible war is, how devastating to everyone involved, the soldiers, the officers, their families and even their future children. It’s about how, in history, we all too often choose to see only the aspect which pleases us.

The symbolism attached to the raising of the flag on Iwo Jima is an occasion to explore the misrepresentation of courage in battle in order to divert public attention from death and destruction to what is perceived as ideal: valor, the American spirit, and self-sacrifice. James Bradley does an excellent job in portraying the horrors of war side by side with acts of bravery, and the machinations of politicians side by side with the ordinariness of human courage. As he says at the end of the book:

“They were boys of common virtue.
Called to duty.
Brothers and sons. Friends and neighbors.
And fathers.
It’s as simple as that.”

This review refers to the Young Reader edition of the novel.