By Sigal Wilnai on August 9, 2012 in book review, writing 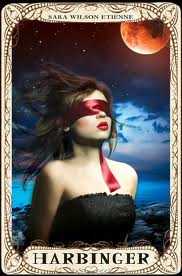 Yesterday I finished reading Harbinger by Sara Wilson Etienne. I don’t usually read paranormal novels — it’s not a genre I am fond of — but for some reason the gorgeous cover of the novel kept calling to me. Have you ever had a cover like that which you just could not resist? The red moon, the sweet-faced heroine with her eyes covered by a red band tied behind her head, her innocent white skin contrasting with her partly-opened, sensual mouth. The stark landscape behind her. I bought the book and immediately started to read.

To my surprise, Harbinger is a green novel, in an eco-friendly, earth stewardship sense. The novel is set in a United states that has depleted its resources, its oceans polluted by oil spills, its animals over the brink of extinction. Suburbs have closed their gates to new residents, and cities have become a center for crime and homelessness. Water is scarce. Food is scarce. And each suburb requires a certain code of behavior from its inhabitants.

Faye, the protagonist, suffers from visions and panic attacks. Her parents send her away to Holbrook Academy, a strange school for misfits where guards walk outside armed with pepper spray and tasers, and where the students are forced to swallow sleeping pills at night. Each night Faye and her friends go to sleep in their beds but wake up on the floor, their hands colored with blood. Faye suspects she is the reason behind the strangeness of Holbrook, and she sets out to discover why.

Maya, one of the students at Holbrook, is a save-the-world fanatic. “Don’t you know you’re devouring the earth?” she yells during the first dinner at Holbrook. “We’ve squeezed this planet dry. Stomped the hell out of it with our carbon footprint. Sent cow shit and pesticides sludging through our rivers and drinking waters.” A paragraph later, as the guards are closing in on her, Maya keeps on shouting: “Our world is melting, frying, starving, and suffocating, and you just keep on chewing.”

While Maya is the more extreme advocate for saving the world, pounding us with her beliefs as with a sledgehammer, for Faye reclaiming nature is a theme which weaves in and out of her thoughts like a song long-forgotten and now remembered. Trees entrance her and terrify her at the same time, as does the ocean. And where Maya seeks to make a difference by forcing others into her point of view, Faye ultimately understands that saving the world is an intensely personal sacrifice.

I read Harbinger in two days. It is an intelligent, well thought-out novel. Faye is an impressive protagonist, unafraid of challenges, willing to risk herself to uncover the truth. Beneath the dystopian, somewhat post-apocalyptic tones of the novel, hers is the story of a girl who just wants to be loved and belong, and who must, in the end, face a choice between her friends and her destiny.

Interview with Writer, Fencer and Teacher Laura Clement
A Moment of Remembering