Nine years ago on this day, Eden was born. She clearly wanted to arrive in this world. After sleeping through her first night, she then refused to sleep at night for the next year, waking up every forty minutes to stare at the darkness with big brown eyes. At eight months she spurned the food I made for her, finally splashing into her first soup (prepared by our friend Lior) at ten months. This brought about a laundry crisis in our family which caused me for a while to consider dressing her in single-use clothes.

Eden’s favorite activity once she learned to sit was to be driven around by her brother Uri. Uri would help her onto the bed of his little black truck, lift the tail door shut behind her making sure she was safely inside, and only then would he get into the driver’s seat and start pumping his little feet in a Flintstone-imitation run. 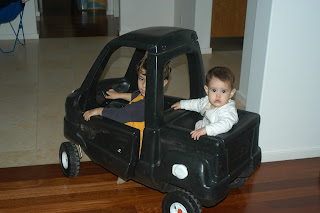 Uri: Do you want to sit in the truck and I will drive you with a big whoosh? And I will tie you.
Eden: Want! (It takes a long time till she sits).
Uri: I will tie you. You’re on the other side. Driving, driving, driving. Woosh! (he runs the car around the family room and kitchen). You want to eat?
Eden: Yes!
Uri: We will put it up here.
Eden: What?
Uri: We’re driving some more. Are you ready?
Eden: Yes.
Uri: One two three four five. We are starting! Digidigidigidigidan digidu digidigidigidu. Are you okay Digidigidu? Do you want to eat a banana? (They both eat a banana).
Uri: This banana is crazy. We have to eat it when we come back from the trip. Come on, Eden. Let’s go. Do you want to take the banana? (Makes a noise like an engine starting, runs around the room in the truck).

At age two Eden started attending preschool. She screamed for the entire first week, after which I moved her to Teacher Lana’s room, where she screamed for the rest of the year, but only after I picked her up. One time Teacher Michael had to help me dislodge her from the tire swing to which she held, screaming bloody murder, with a strength unbelievable for her two-year-old arms.

But Eden’s true love, from the moment of her birth, has always been and still is Saba Amos, my father. She calls him Sabi as an endearment and twirls him easily (and sometimes cruelly) around her little finger. She swims with Sabi in the pool, discusses important computer issues with him, and snuggles with him as often as she can.

Today Eden is nine, and I am amazed. Where have the last nine years gone? How could she already be done with third grade when I remember exactly what she looked like at age five? I love how she’s growing up (but why so fast?) into this wonderful, joyful human being.

Happy birthday Eden, sunshine of my life, and may we celebrate together many many more!

My Hectic Life in Books
Faith Makes the Luck, By The Great Horn Spoon!

10 Responses to Vignettes in Honor of Eden’s Birthday