One day, three years ago, Eden and I saw a notice on a message board with a picture of a white chihuahua. We stopped for a look, certain that this poor animal had been lost. Instead, we discovered that one of the neighbors was giving it away. By the next day, Zippy had moved into our home. The neighbor, who had brought him from a shelter in LA with the intention of finding him a home, told us he was a friendly guy, eager to sit in any free lap and fond of chewing shoes. We found out the shoe chewing thing was right: at least one of Bridgey’s tennis shoes (not a terrible loss, since she prefers heels), two of Eden’s flip-flops (one of each of her two pairs), the pet sitter’s shoes, and at least one of mine. 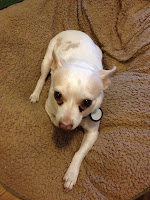 But Percy, as we renamed him, was not a friendly guy. He growled at us, not afraid to use his teeth (small and useless-looking though they appeared) to good purpose if we crossed him. His grumpiness did not prevent us from appreciating his endearing side. Percy looked cute and sweet, no matter how much he worked to prove the opposite. And so we lavished him with love, attention, petting, and food. 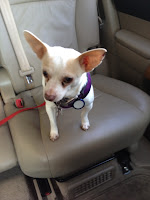 I still think twice before giving Percy access to the air space close to my nose. No, he does not stink, but he bit me in the nostril once, and though he did not draw blood, it hurt. These days, however, Percy doesn’t growl quite as much as he did when we first brought him home. He exposes his belly, closing his eyes in sheer happiness when I walk nearby, inviting me to pet him. When I sit on the floor, he settles in my lap, lifting one paw after the other as though testing how stable my legs are. Of all my dogs, he is the one who gives me the most affection. When he licks my hand, I know it is out of true love.

You might ask, why am I telling you about Percy? Well, my friends, I believe this story is a lesson well-learned. Where I give love, love grows back. Where I open my heart, a heart opens back. A friend told me about the basketball player Derek Sharp whose divorce from his wife was unpleasant and anger-ridden. Today, you might be surprised to hear, he has good relations with her. When asked how he achieved this feat, Sharp replied (and I’m retranslating from the Hebrew): “I tried to kill her with good nature. That’s the way my mind works. You’re nice to people. You always treat them well, and they don’t have a choice. In the end you reach them. It takes time, but it is always a success.”

I killed Percy’s grumpiness with love. I want to remember that next time someone growls at me. Just give them love. That’s all.

Who in your life would you like to kill with good nature or love?

Priorities Rock!
How I Climbed the Matterhorn and Came Back Alive — Part I

6 Responses to Kill Them With Love!