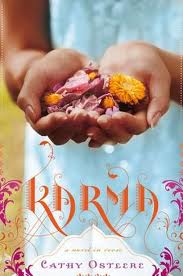 A few days ago I finished reading Karma, a teen novel in verse by Cathy Ostlere. Karma follows a few months in the life of Maya, a young Indian girl who grew up in Canada to a Sikh father and Hindu mother. Maya visits India with her father and finds herself adrift in India after the assassination of Indira Gandhi and the anti-Sikh riots that followed. Her father disappears, and Maya, after waiting for him at the train station, finally leaves Delhi by herself.

On her way Maya meets all kinds of people. She discovers kindness in unexpected places as well as self-interest and cruelty in others. It is a time of upheaval which brings out either the worst or the best in people, and in a country like India the extremes are in plain sight for Maya to see. As she summarizes: “There is/ so much life here. And too much death.”

The landscape Maya navigates in the novel is predominately dominated by males, all of whom feel entitled to control her fate. The few women she meets are either disinclined or unable to fully assist her. Maya must learn to tap into her strength, to speak up for herself, assert her independence and her own wishes in order to survive. Like the Buddha, she needs to face her own suffering as well as mankind’s so as to grow both emotionally and spiritually and begin to understand the confusing world in which she lives.

Maya passes, phoenix-like, through fire, silence and a desert storm in order to be reborn an older, wiser Maya. After witnessing the murder immolation of a Sikh on the train she says: “sometimes there’s nothing left/ to say to another human being.” She is struck mute by her feelings of guilt and horror. For over one hundred and fifty pages, the story is turned over to Sandeep, a young man who tries to become Maya’s protector in her silence. But Maya is the only one who can save herself, and she must speak up in the end.

Toward the end of the book, Maya discovers the confidence to assert herself: “…I take a deep breath and explain/ what it all means: I have learned what love is.” And later she says: “…I have proved that I am/ more than just a daughter in this/ world.” Maya grows beyond her roles as a girl, daughter, and female to become Maya, the goddess of change, able to see the wind as it blows across the story of her life.

I was fascinated by the symbolism of Maya’s birth as daughter to a Sikh and a Hindu, the unresolved religious disagreements between her parents, and the anti-Sikh killings by Hindus which followed Indira Gandhi’s assassination by her Sikh bodyguards. None of these conflicts is resolved by the end of the novel, and I found this so very real. Sometimes conflicts just are. But a hope remains: Maya’s love for Sandeep and the possibility that the hostilities will in the future end with them.