A few days ago I had an illuminating conversation with my daughter Eden. I had asked her, Would you like to hear about a dream I want to do?

She replied: “Does it include me?”

She said: “I don’t want to hear about it.” And then she added: “I think parents should only have dreams that include their kids.”

Not quite knowing how to react (were her words a cute thing to say or completely unfair?) I did not respond directly. At first I was blown away by the realization of just how much resistance I could expect from the kids when I tried to go for one of those dreams that do not include them. Then, after talking this over with my therapist, I was startled by another realization:

One of my dreams that does include my kids is that they will be free.

At least partly, I think, my kids watch me following my dreams. I’ve climbed mountains and gone on backpacking trips. Dar and I even ventured as far away as Prague and Israel without them. I try very hard, however, to fit the timing of fulfilling my dreams so that it does not disrupt the kids’ schedule. I go hiking and backpacking when they are with their dad. I went on a meditation retreat on dates that promised the least days away from them. I cancel anything if it interferes with their needs. 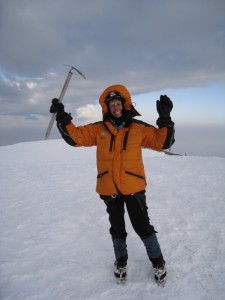 Me on top of Rainier

If I hiked the Pacific Crest Trail, a 2688-mile-long trail that traverses California, Oregon and Washington, I would not be able to fit it on the days that the kids are with their dad. I would not be able to be there if they had a cold. It would take me at least a day (or likely more) to get back if they needed me or if, heaven forbid, some emergency threatened them. I would be really, really far away.

But I would be walking my dream.

Some people have said to me: “Why don’t you wait till the kids are older? People hike the PCT even in their sixties.”

I don’t have an answer to the question, not a good one anyways. Except, of course, that I could say: When you look into your own heart, and touch your own dream, do you really want to wait for some imaginary better time to do it? Until the kids are older? Until you’ve retired? Until some made-up set of conditions are met? Or would you like to spread your wings today, now, this moment? Would you like, right now, to be free?

Next year, come May, I would like to spread my wings, pick up my backpack, and go hike the PCT. Uri will be almost 16. Eden will be 13. I will be 44. Dar will be kissing the other side of 50. I feel in my heart that it’s time, that I am ready for taking this freedom. In the last year I was beset by asthma, an inflammation in my foot, the flu, and back pain. I would like to follow my dreams now, while I still, maybe, can. While I’m still young enough and healthy enough and fit enough. While I still want those dreams. While they still mean something to me.

I hope that by walking my dream, my kids will see that dreams matter and that fulfilling them is as important as anything else we do in our brief, magical flash of life. I hope that my kids will learn and remember that they matter, and that while many things are important, so are those dreams that lie in their heart.

The Silver-Lined Cage
A Year To Live — 364 Days