By Sigal Wilnai on August 20, 2013 in adventure, dreams, vacation 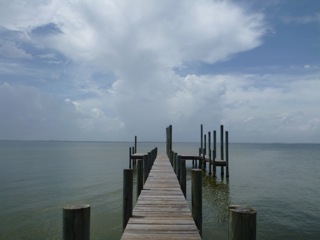 I found out about manatees in a children’s book and fell in love with these gentle sea cows (so named because they eat sea grass). The manatee in the photo looked lovable and cuddly, the perfect candidate for a child’s favored stuffed toy. The story told that Christopher Columbus mistook manatees for mermaids, and, looking into the human-like compassionate eyes of the photographed manatee, I could understand why Columbus (and other sailors after him) could confuse these graceful mammals with a mythological fish woman.

San Diego’s Sea World has a manatee exhibit, and the kids and I were charmed by them on several visits. But watching a manatee in an aquarium is not quite the same as seeing one in the wild. I wanted to go to Florida and see a real, live, wild manatee. In my imagination, I saw the manatee swimming about, floating before my eyes, just the way it had in the aquarium.

A Florida Visit in 2009 with the kids and my cousin Ella did not produce any manatee sightings. We took a boat ride to where we were supposed to see them, but there were none to be seen. We saw alligators, crocodiles, many kinds of birds and even had  our first viewing of dolphins, but no manatees. My disappointment was great. I had so wanted to see one!

On a Florida visit in January 2013, we were definitely going to see a manatee. We stayed on Key Largo and planned visits to parks where we had heard that manatees abound. We rented kayaks to get as close to them as we could. “Some people saw a manatee earlier today between those islands over there,” the ranger pointed at two little islands across a bay. We paddled but saw none. We saw none on Key Largo. And though a different ranger sent us to another park, we soon discovered it was a wild goose (or manatee) chase. We went back home empty manateed.

Third time’s a charm, you know. On this last visit to Florida, Dar made sure that seeing a manatee was in the bag. Not only did he rent us a beach house on the lagoon where the manatees live, but he also arranged for us to have a stand-up paddleboard tour of a canal where, we were told, the manatees live. They will actually put their noses on our boards, the guide promised. We could pet them, potentially, if we’d want.

My readers, are you curious to know if I finally had my wish come true? Did I pet a manatee’s head? Did I watch it swim flirtatiously under my board? A storm came in as we headed out and forced us back to shore, and there was no manatee petting, viewing or admiring from the stand-up paddleboard. I am almost certain, however, that I saw manatees three times from the pier near our beach house. They were kind of far, and only a little bit of them peeked out of the water, but they were round and smooth, and somehow manatee-like.

As elusive as a mythological mermaid, seeing more than five percent of a sea cow still remains a dream. Perhaps in nature that much manatee is all that can be seen, or perhaps next time we come to Cocoa Beach there will be no storm, and we can paddle to the canal, and the manatees will be there waiting for us, ready to lean their heads affectionately on my board.

Time to Pause
Intention to Change