On our last day at Grand Bahama Island, we went over to Unexso for a Dolphin Encounter. A twenty-minute boat ride through clear, turquoise waters took us into a secluded bay overlooked by expensive-looking homes. We got to pet a fourteen-year old dolphin named Coral who kissed each of us in turn. She and another dolphin swam around, splashing us. They spat water at us playfully, swam backwards on their tail, executed synchronized flips, and impressed us more than I had thought possible. We had an absolute blast. 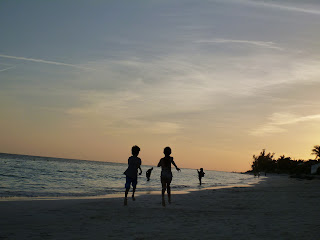 As we sat there, in that gorgeous, well-maintained garden above the limpid dolphin pools, surrounded by luxury homes, on the secluded bay with the clear turquoise water, it occurred to me that as a tourist I could potentially just see this face of Grand Bahama Island. Had we not rented a vacation rental which happened to be in a more seedy part of town, had we not driven around the island, had we only stayed near the beaches and the touristy activities surrounding them, we would not have known anything other than those turquoise water, the wide sandy beaches, the fancy restaurants, and a deluxe hotel room.

Perhaps finding ourselves stranded by our taxi driver next to a dilapidated condominium near a sprawling trash heap on our first day was a somewhat challenging experience. Perhaps discovering that the taxi driver was not mistaken, and that this was indeed the condo we rented was pretty depressing. So were the bird-poo-covered pool, the not impressive five-minutes-away beach, and the bare-shelf grocery store. But because of those challenges and having come at the low season, I think we can say that in four days in the island we got to know its less touristy face quite well.

As the island empties of all but its inhabitants, it seems to release a big breath, like a bellows that has finished its work for the day. Stores shut their doors, small restaurants dim their lights, the chairs, umbrellas, and kayaks disappear from the beach. The island folds into itself, resting before the next horde of tourists.

Now at home, a part of me is left wondering at this island whose every effort seems aimed at tourism. I want to know: do the Bahamians ever go to the beach to swim and paddle and snorkel? Do they ever enjoy all the beauty that the island has to offer. The beach in Israel is full of bathing, jogging, walking, and otherwise having fun Israelis. Frenchmen kiss handsome Frenchwomen under the Tour D’Eiffel. Californians meander on the Golden Gate Bridge and eat dinner at overpriced restaurants at Fisherman’s Wharf. 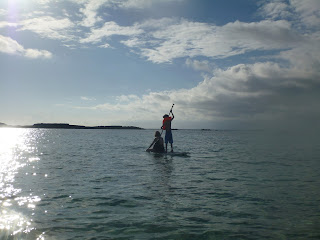 But on a sunny Sunday afternoon in the off season in Grand Bahama Island, the beach was deserted except for one lone woman selling cheaply-made wares under the shade of a coconut palm. And I couldn’t help but wonder: don’t the Bahamians swim in the ocean on the weekend? Do they ever go, just for fun, to check out the stores at the International Bazaar? Have they ever seen the dolphins at Unexso? Or do they just live day to day in service of those hordes of tourists that come without ever enjoying the bounty of the island for themselves?

Review of Scarlet by A.C. Gaughen
The Art of Hearing Heartbeats by Jan Philipp Sendker