By Sigal Wilnai on January 25, 2013 in book review, romance novel

The word rogue has the following synonyms in my dictionary: scoundrel, villain, good for nothing, miscreant, reprobate, and wretch — and in its more archaic use: blackguard and knave. I’ve already written in the past about the abundance of rogues and rakes in romances — they are well loved. But in Stephanie Laurens’ romance, A Rogue’s Proposal, Demon (otherwise known as Harry or Harold) Cynster is a rogue of a different kind. 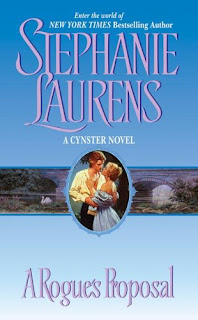 I did not fall in love with Demon — something that I absolutely am looking for in these romantic heroes. He irritated me from the first, chasing after Flick the boy who he suspects is a woman because of the shape of his (or rather, her) bottom. Mostly, however, Demon irritated me because he wouldn’t give Flick (Felicity) even the slightest chance to prove that she can get along just fine without being rescued by him. If he was a rogue, he was a rogue in that.

By continually rescuing Flick, Demon managed to compromise her honor twice, lost the trail of the man they were both following, and made Flick feel lonely and unloved (in an attempt to keep her reputation intact). Fortunately, Stephanie Laurens kept rescuing him: the lord who saw Flick and Demon together got mumps, Flick’s lenient and apparently too optimistic guardian always believed their stories, their quarry magically reappeared in the corner of the street in front of their eyes, and an old aunt popped up to explain to Flick why Demon was ignoring her.

So many romance novels present the strong, independent heroine. I felt sad for Flick to miss being in those ranks. A natural leader, responsible, led by a strong sense of justice and fairness, courageous to a fault, I wanted Flick to experience the same excitement and freedom as other regency heroines. Every time Demon stopped her from rushing headlong into an adventure, every time she felt she had to ask him for help, every time he rescued her from what he perceived as a threat, I cringed. I wanted Flick to get her wings.

Stephanie Laurens, however, had a plan, which perhaps I might have seen had I stopped being so irritated with Demon all the time. Demon is a man who is used to seeing women in black and white, as either weak and helpless maidens or as temptresses. Innocent yet smart, loyal, brave, and often rush, Flick is neither damsel in distress nor a woman of the world. Demon starts out by reluctantly allowing her to lead the way out of a room, but he ends up, whether he wants to or not, admitting that she’s just as capable of rescuing him as he is her.

I ended up enjoying this novel a lot more after I understood what Stephanie Laurens was about, though I did not love Demon to the end. Too controlling and uncommunicative to my taste. A Rogue’s Proposal is the fourth in the Cynster novels (of which there are twenty). I’m thinking I might check the first one out.

Check out my review of another Cynster Novel here: The Capture of the Earl of Glencrae