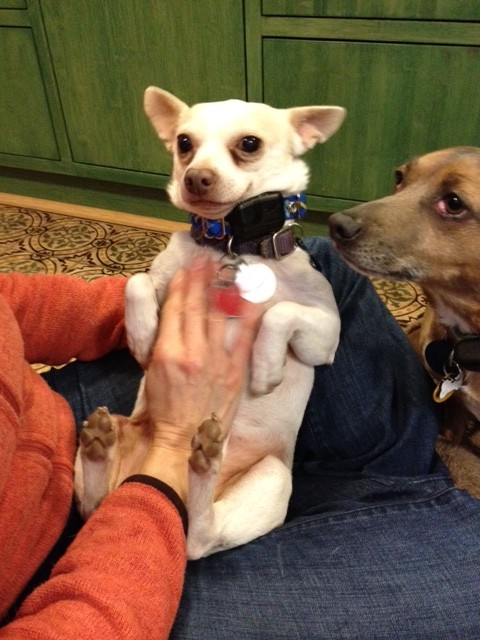 Giving Reiki to my chihuahua Percy

Many years ago, I first heard of Reiki through an article in an Israeli for-women magazine. It was one of those articles revealing juicy details about a celebrity, in this case, a newly popular kids’ television starlet, a woman younger than I.

In the article, the starlet described her poodle’s last days. The dog had been sick with cancer, I think, and the starlet had sat with it throughout the night, giving it Reiki. The description was heart-rending, but I scoffed as I read. I had never had a high opinion of this woman and thought the programming she was involved in was shallow and silly. Poodles, whether dead or alive, I considered a silly breed. And this Reiki thing, which I had never heard of before, seemed to me even sillier.

That this woman would think that putting her hands on her dog could cure it of cancer! Hands are just hands, flesh, bones and blood — I knew this for certain. Nothing was coming out of them, and most definitely not some flaky Reiki which this flaky TV star imagined could somehow cure her poodle.

I judged, and harshly, and the universe watched and laughed. Water passed under the bridge of my life, smoothing down rocks, while the wind blew through the cliffs of my beliefs, carving out new formations in the hard rock. And now, here I am, a Reiki Master who believes, who knows what Reiki does firsthand.

Flaky Reiki. How could mere touch do anything so grand as to change our physical condition? The idea that energy could come out of our hands, that we could heal with it, seems preposterous! It suggests we might be something more than just body, and surely that can’t be right. Or can it?

Some years after reading the article, divorced and depressed, I allowed a friend to give me Reiki. She wanted to, and though I did not believe in it at all, I figured it probably would do no harm. I slept well for the first time in a long time. Unable to resist the lure of a good night’s sleep, I decided to learn how to do Reiki for myself, but though I opened my mind to the possibility that Reiki could help me sleep, I turned up my nose when my teacher claimed that Reiki could recharge, if only for a little while, an empty battery. Recharge a battery! I scoffed, but the universe, once again, softly laughed.

The world is filled with mysterious things: black holes, atomic bombs, fancy high-heeled designer shoes, penguins, mustachioed men. In California’s Silicon Valley, the daughter of a successful electronics engineer now believes she can recharge batteries with the touch of a hand. One day I judged flaky Reiki and flaky TV star, and the next here I am, giving Reiki to batteries, to my dogs, friends and strangers, no longer scoffing, fully believing that I’m sending out to the world healing, gratitude, compassion, and love.