By Sigal Wilnai on March 1, 2012 in inspiration, romance novel

This morning I came by an Ella Fitzgerald quote which read: “It isn’t where you came from; it’s where you are going that counts.” The quote accompanied a photograph of fog misting through a forest scene with a path climbing up and disappearing into the picture. I considered the photo and the quote for a few moments. Something felt not quite right seeing them side by side. Then I realized. To me, that photo said: it is not the destination but the way that counts.

Ella Fitzgerald says that where we come from does not count, but I remember where I sat as I wrote the very first stirrings of The Princess’ Guide. Princess Anna Mara came to life just outside the doors of Ostrovsky High in Ra’anana, Israel. I wrote her story for my friends to read if they were bored during their next class. I remember my enjoyment as I wrote it, my laughter, the magic.

“It’s where you are going that counts,” Ella Fitzgerald says. But I wonder, how true is that? I used to feel that every choice I made created ripples which obliterated everything around me but that one direction I chose. Every choice was epic, unyielding, unalterable. But lately I begin to think, what if the choices I make are not as life-shaking as I imagine. What if deciding on road A does not take me that far from where I’d have gone on road B in the end? What if the destination is more or less the same, but it is the way there that counts?

I guess I am in a philosophic mood today. After all, I’m going to turn 40 in a few days and become middle aged, as my son announced. I’m allowed to be a bit more introspective than usual. It is raining outside, a soft pitter patter of rain that gently wets the ground, and the scene outside my window is not so far removed from the photo above Ella Fitzgerald’s quote. This is where I am now, on those stairs, in that mysterious forest. I’d like to believe that my way goes up that path in the photograph and not down, but perhaps up and down are both illusions, existing only in my own mind.

And at this moment in time, as I stand there on my path in my forest, I wonder if it even matters what my destination is or which direction I first came from. The only thing that matters is that I’m here now, in this beautiful place, getting a little wet, it’s true, but breathing in the fresh air that the rain cleaned with fresh oxygen exhaled by those ferns below. Can you tell I’m happy where I’m at right now? At least for today, I am. 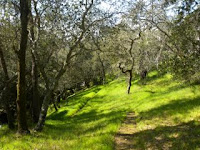 My wishes for my birthday month: to write a few pages daily in the romance novel. To walk in the forest a few times each week. To take deep breaths. To accept what I am given with love and appreciation. To smile and laugh every day.

Do you have any March wishes?