Yesterday afternoon I sat by the kitchen table and cried as I finished reading Sharon Creech’s middle-grade novel Walk Two moons. I had picked it up the week before in a used bookstore. On the back cover, a quote from the School Library Journal promised “A richly layered novel about real and metaphorical journeys.” I started reading the novel wondering what it will be like.

Sal, the narrator, tells of the trip she took with her grandparents to Lewiston, Idaho to see her mother who had left on a bus trip a few months before. She promised to return but hadn’t. Sal hopes to arrive on or before her mother’s birthday and to convince her mother to come back home. 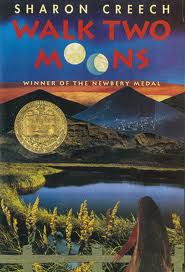 As they drive, Sal tells her grandparents the story of her friend Phoebe and her family who are all “thumpingly tidy and  respectable.” Sal describes Phoebe’s mother as “ Mrs. Supreme Housewife” and her father as “Father with a capital F.” But Phoebe also notices that underneath her enthusiastic baking and cleaning, Phoebe’s mother is unhappy. When Phoebe’s mother disappears with merely a note promising to return in a few days and a freezer filled with prepared meals for her family, Sal has a bad feeling. It is her experience that mothers promise to return but don’t.

Another friend, Ben, lives with his uncle and aunt, with no mention made of where his family is. Three absent mothers: Sal’s mother, Phoebe’s mother, Ben’s mother. And questions abide. Why did Sal’s mother stop writing to her? Why did she leave? How could she leave? And as a mother, I could not help but feel upset. Why all these absent mothers? How could Sal’s mother, who so clearly loved her, leave her? What is this story teaching children? I asked myself. That mothers are not to be trusted? That they can leave any moment? That mothers are inherently unhappy being just mothers? That if the child does not notice the mother’s unhappiness, does not appreciate her, then the mother might leave?

In children’s literature, parents are often missing: dead, or emotionally unavailable. This allows the main character to solve problems on his or her own. Thus Harry Potter is an orphan and his adult helpers either die or are incapable of helping him. Taran, of Lloyd Alexander’s Prydain series, is an orphan. The children going to Narnia live apart from their parents (and Aslan either is not present or is presumed dead). In the novels, these characters move from youthful dependence to independence. But at what cost?

Sal’s story takes her on a journey halfway through the United States and inside her own heart, through anger, guilt, denial, fantasy, and finally acceptance. I cried at the end, and I forgave Sharon Creech for the missing mothers. And yet my question remains: could we as writers find a way to allow our young characters to grow with the support of a family behind them?

What do you think?

If You Wish, It Is Not a Fairytale
The Golden Key of Thoughts