By Sigal Wilnai on April 4, 2012 in Uncategorized 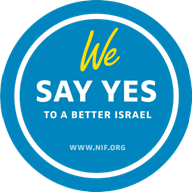 Yesterday I found myself having political debate for lunch. It was all my father’s fault, or maybe, if we go far enough, it was mine. I had asked him that morning if he was free for lunch, but he already had an engagement with people from the New Israeli Fund. Rejection is never easy, even if it’s just for lunch, but I recovered quickly.

At one, my father called and asked if I wanted to join them. I answered (hopefully politely, but probably not) that I would not be caught dead having a business lunch with anyone from a fund. I thought he was talking about the Jewish National Fund, an organization I am only interested in because they plant trees — if I had known it was a political organization I might have been even less excited about the prospect. My father, however, persevered. “His wife is a writer,” he said, and I assumed he meant the wife of the JNF guy, “She has six children’s books published with Random House.” I turned the car around and came to meet this guy and his fabulously interesting wife.

The fabulously interesting wife was not there at all. Instead, a man and a woman sat across the table from my parents, all four engaged in discussion about the future of Israel, behaving as though they were going to make some difference in the world. The sides were even: my father, the so-called realist, claiming that Israel has no future and springing on his opponent reasons why peace could never come to the Middle East, and NIF man, a starry-eyed optimist, stating that since the US now has a black president, which no one would have believed fifty years ago, anything could happen.

I explained to NIF man that I have heard my father’s diatribe before and suggested, still under the mistaken idea that he was from the JNF, that we fast-forward to hearing his plans about planting trees. Sadly, NIF man had no interest in planting trees and was convinced that he could change my father into an enthusiastic supporter of the future of the Zionist state. I chewed quickly, looking at the pictures on the walls, at my mother (who listened enraptured, but I knew it was all a mask — she dislikes my father’s pessimistic outlook), and at the door, trying to calculate the speed by which I could reach it.

As I sat there, suffering intensely, it occurred to me that we need ultra-optimistic people like that NIF guy with his single-minded idealistic passion. Arguably, we also need pessimists like my father to fan the flames of their idealistic fire. But I had rather not be there when they meet. As soon as I could I excused myself, explaining that I live in a bubble, safe from political debate. And then, as politely as I could, trying not to show too much relief at my approaching escape, I got up and fled.

Lying, Protecting, Loving
The Love that Keeps on Growing