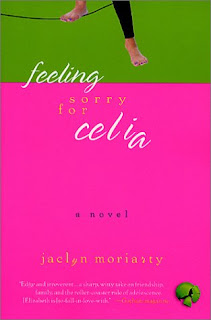 “Dear Miss Clarry,
It has come to our attention that you are incredibly bad at being a teenager.” This letter, addressed to Elizabeth Clarry, comes from the Association of Teenagers and opens the funny and highly readable Feeling Sorry for Celia by Australian author Jaclyn Moriarty. The letter ends with: “Not to hurt your feelings or anything, but you are an embarrassment to teenagerhood. Therefore, could you please climb into the refrigerator and wait very quietly until your teenager years end?”

Elizabeth Clarry has a lot on her plate. Her mother is trying to feed her oatmeal and asks her to start dinner (and means for her to finish preparing it too). Her friend Celia disappears and needs to be rescued. The Association of Teenagers, the Best Friends’ Club, and the Cold Hard Truth Association send her letters telling her that she is never enough. And her English teacher is not only making her write letters to a complete and utter stranger, but is unhappy about her tendency not to complete homework assignments and is using her love of letter-writing against her. Not to forget, her father, who has been pretty much MIA most of her life, has suddenly moved back to Sydney and wants to have dinner with her and discuss the qualities of wine.

So much pressure on one person. I was not surprised that Elizabeth loves cross country running. With the inordinate amounts of criticism that the Association of Teenagers and the other groups heap on Elizabeth, I could not imagine her ever finding the will to stop running. Except, as she says, the only pleasure in cross country running is when you can finally stop.

So many of us go through life with a critic sitting on our shoulder. Mine, by the way, is definitely male. This critic has something to say about everything I do, whether it is what I said to a friend on the phone, my writing, or what I cooked (or did not cook) that day. Often, it is hard for me to hear myself over the voice of the critic, and making choices becomes sifting through contradictory but always denouncing remarks.

Feeling Sorry for Celia follows Elizabeth’s gradual acceptance of herself as she sees other people’s quirkiness around her, their anxieties and self consciousness, their desire to escape. In other people’s humanity, failings as well as good qualities, Elizabeth finds understanding and empathy for her own. I, her reader, read along and admire Elizabeth’s ability to distance herself from that critical part, assign it separate identities and finally discover within herself the capacity to tell that part that it is wrong.

I read the novel in less than four hours, and I was so sad to finish it. I had hoped to make it last for most of my flight to Israel, but it was just too fun to read. And I love it when a novel is both hysterically funny and still has a lesson from which the reader can learn. Separate thyself from thy critic, reader, and thou shalt be able to juggle five billion things as well.

Okay For Now by Gary D. Schmidt
Jerusalem Air and the Need for Hugs