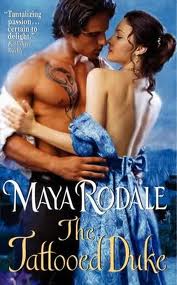 Sebastian Digby, the hero of Maya Rodale’s The Tattooed Duke, refuses to adopt the shackling conventions of Nineteenth-Century British society. He had much rather follow his heart, explore the world and experience all sorts of adventures. Life, however, has a tendency to catch up with those who try to elude its responsibilities, as he discovers when summoned back home from Tahiti to assume his duties as the Duke of Wycliff.

Wycliff may now be a duke, but more than that he is a sensation in British Society — the kind of sensation no one wants attached to himself or herself. Not only is he rumored to have engaged in cannibalism and to have spent an entire night in a harem, he is now one of the Wicked Wycliffs, the spendthrift playboy dukes who tend to play around with their maids. No one doubts that this Wycliff will be just the same.

Eliza, a Writing Girl for a yellow newspaper, is sent to write a series of articles on the sensational new duke. Disguised as a maid, she falls in love with Wycliff even as she writes columns that reveal all of his secrets to the ever-more-shocked world. Wycliff and Eliza betray each other as they try to find a balance between their individual hopes and dreams and this new reality in which another human being suddenly has claims on their future. Does that sounds ordinary to you?

And yet nothing about this novel is banal. Not even the most minor character is what he or she seems. Wycliff resists falling into the Wicked Wycliff tradition while keeping his long hair and solitary earring, refusing to wear a necktie and proudly acknowledging his tattoos. Eliza ties herself in knots trying to redeem the duke while keeping her job at the crowd-pleaser, scandal-mongering newspaper. And the whirlwind begins: deception, lies, a secret locked room, an adventurous expedition to a legendary city, bigamy, tea laced with whiskey, a one-armed man whose second arm is in perfect working order, a child born out of wedlock, a  lady who is Hades’ Own Harpy, and of course loyalty and love.

Fabulous book! I loved the Henry Fielding-styled subtitles to the chapters (Fielding is also Eliza’s last name) and the many allusions to eighteenth-century British novels. And (Spoiler Warning!) the best part last: the novel ends with the most extraordinary marriage proposal:

…her beauty left him speechless. Of all the sunrises and sunsets he’d seen, of all the sublime natural spectacles and stunning sights he’d witnessed on his travels, nothing compared to Eliza emerging from the bath.

Silently, he dropped to one knee.
“Wycliff?” She said, lifting one brow questioningly. She glanced around for a towel. She looked at him on bended knee before her. Little rivulets of water trickled down her soft, pale skin. In that instant he was jealous of a mere droplet of water.
“Will you marry me, Eliza?”

Teaching, Learning, and the Kama Sutra
For Love of a Dog