By Sigal Wilnai on November 9, 2012 in Uncategorized

So much about raising chickens appeals to me: reconnecting with nature, knowing where my food comes from, eating wholesome eggs. We raised seven little chicks this summer. We kept them warm and fed, petted them, and allowed them to perch on us and run around the TV room. Once the chicks grew, we moved them to a coop outside and started counting the days till we get fresh, natural, home-grown eggs. Instead, one chick after the other began, unmistakably, to crow. Out of seven chicks, five turned out to be roosters. 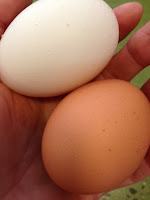 I am fortunate to live in a town that allows roosters, so long as the neighbors don’t complain. But five roosters? On two little hens? Turns out there are no places willing to take in roosters. In my search for a rooster home, I called Animal Place in Vacaville. Jacie, the adoption coordinator, told me she hears stories such as mine all the time. People are promised that they will get 98% female, but the real ratio is a lot more like 50% male. At birth, chicks are “sexed” to find out if they are male or female and the males killed. But the sexing is not accurate. Females end up killed just as much as males, and people still end up with roosters. The best way, she said, is to adopt a hen.

Animal Place rescues hens from factory farms. Have you ever wondered for how long hens lay eggs and what happens to them once they stop? I have never given the matter any thought, and I was stunned when Dave, another Animal Place coordinator, told me that farmers replace (translation: kill) their chickens every two years. These “used-up” chickens are not, in case you were wondering, the chickens that we buy to eat.

In March, Animal Place, in cooperation with Stanislaus Animal Services Agency, rescued 5000 chickens from a factory farm in Turlock. 45,000 more chickens died after the owners abandoned the factory, leaving the hens without food or water. When Dar and I came to Vacaville to pick up four hens, Animal Place still had about 300 birds left. Dave explained that these birds were raised to lay. Their combs hung long and strange across their heads — from lack of sunshine during their year and a half at the factory farm, Dave explained. 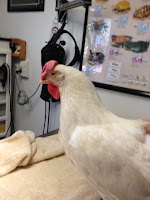 Today, one of these leghorns is sick with an egg stuck in her reproductive system. Her prognosis is not good. She might die. She might live but never lay any more eggs. Either way, she is no longer just a chicken — since we want to keep her we now look at her as a pet. The vet explained to me that since these birds are genetically-modified to lay an egg a day — a completely unnatural phenomena — they tend to have many reproductive problems.

I wanted to get back to nature, to reconnect to who I am on the most basic and fundamental level. Instead I find myself bowled over by just how deep our rape of this earth really is. I try to be environmentally conscious and conscientious, and yet I find that I eat eggs of chickens bred like machines who are kept for only as long as they are useful. And there’s no way around that. No matter if they are pasture-raised, cage-free, organic, free-range.

This is true for so much of what we eat. Soybeans and corn. Milk. Meat. Eggs. Chocolate and coffee. We seem irretrievably divorced from what should be natural and pure in our food. I feel so sad today. I am sad about the millions of chickens slaughtered in the United States every year after they have laid eggs for their allotted 18 months. I feel sad for all the little chicks that are killed at birth. I feel sad for cows and pigs, goats and sheep, all animals who are so useful to us, and who we reject once their usefulness ceases. And sad for Clementine in her cage, suffering from her stuck egg, which, if it were not for our consumer, supply and demand society, she would never have had to worry about.

To find out more about the life of chickens:
Society for the Advancement of Animal Wellbeing
Animal Place