By Sigal Wilnai on August 18, 2017 in adventure, being different, inspiration, Love, Nature, The strenuous life

Dar and I recently returned from a visit to Alaska, where I was struck by two curious qualities: the wide expanse, breath-taking vastness of the landscape, and the Alaskan maxim of working only so that you don’t need to work.

Apparently, according to some people we spoke to, Alaskans work only so they have enough money to live on, rather than to collect it in the bank in case of something which may or may not happen in the future. This seems a strange maxim, you might say, to someone spending her days in the Silicon Valley, where people work for a variety of motives, none of which has anything to do with mere subsistence.

I like this idea of working only so life can be sustained. Those of you who know me, know that I have never shown interest in inventing new technologies, increasing the depth and breadth of human power over the universe, or collecting more money in my bank account through any of various means. In a way, I could say that I have struggled against my family’s (and my culture’s) tendency for ambition all my life. This has earned me the unacknowledged title of Black Sheep in my family. My father, in fact, once introduced me to a friend as “My daughter who is not a doctor.”

Perhaps I should move to Alaska and live for the moment, as it seems many people do over there. The thought is tempting. I love the Alaskan open spaces, the tundra, the mountains, and the wildlife. I love the relaxed atmosphere, the fewer cars, the few people. I love the idea of living so close to nature. I love the idea of twenty-four-hours-a-day sun, even if I have a hard time imagining twenty-four-hours-a-day darkness or 30-degrees-below cold. I doubt, though, that I would fit in Alaska society. It seems many people there tend to be more conservative about some things, like environmentalism or LGBTQ rights. And they sure do seem to be enthusiastic (almost righteous, I thought) about hunting and guns. 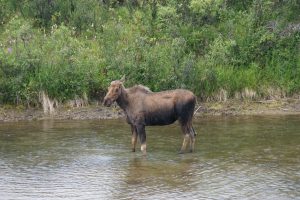 This is an Alaska female moose who identifies as salmon.

There’s many things I can complain about here in the Bay Area, but not those, for sure. People here seem to be mostly liberal. Take, as a case in point, my recent attempt to manage (behind the scenes) my son’s first foray into the world of college life. The young man, soon to be seventeen, is taking a class at a community college this year. In an attempt to make some money, the college charges for parking fees, not unlike many other universities and colleges around the country. So a few days before school started, I logged into the website and purchased the young man (who is also a young driver) a parking pass. After paying I received notification that the shipping will take ten days and that I will receive a temporary parking pass, which, however, never arrived.

What to do? Like the good, considerate, over-zealous parent I am, I called the school to ask about this. But I didn’t want them to know that it’s me, the parent, calling. After all, this is college, and it would be embarrassing if they knew the parent called for the student. So, with this logic in mind, I told the cashier who answered the phone that I was my son. “And you’re a high school student?” She marveled. “Your voice sounds so much older.”

Ah, the suffering of telling a lie.

Only after hanging up did it occur to me that in order to see the status of the parking pass, the cashier had looked at my son’s information and could probably see that he identified himself as male, while my voice (old though it may sound) was distinctly female. For a moment, I felt discomfited. She must have known I was lying (ah, the suffering of telling a lie). But then the relieving thought came up in my mind. This is California. The cashier probably assumed I was a female identifying as male! And the next thought knocked me off my feet:

In my Californian, crazily-liberal mind, it is much less embarrassing if the college people think my son is a female identifying as male, than if they think his mother called to inquire about his parking pass.

So this is why I plan to stay and continue to struggle against our Bay-Area tendency to rush and be busy and successful and ambitious. I live in a place where it’s (relatively) ok to be gay or transgender, or anything you wish. I live in a place where, when my kids go to visit someone’s house, I don’t really need to worry about guns. I live in a place where there’s fresh fruits and vegetables year round, and sunshine, and where being an environmentalist is only a mildly bad word. We’re not perfect (in fact, we’re pretty ridiculous when you come down to it, with our nail-polish-painted toes and our clothes which we believe say something about us, and all our other foibles which I won’t get into because it’s a whole other series of blog posts). And we still have a lot of way to go before this place is more equal, before we accept all races and all peoples and our responsibility for past and present racism and prejudice. And we have a long, long way to go before we stop using so many of the earth’s resources and live more rationally and with thoughtfulness. But all in all I think we’re trying and a lot of us really care.

So I’m staying here for now, even though Alaska really is such a tempting, lovely place. And, though my parents might be disappointed, I think for now I’ll continue to baaa like the black sheep I am, posting here on the blog instead of submitting to the New York Times, sticking my nose in the kids’ business, meditating, and preaching to everyone who would listen about recycling, using less plastic, and saving water and gas.